Mario’s back, boys and girls! Jailbait Zombie, the latest installment in the adventures of undead Vampire detective Felix Gomez is out just today, and Mario has dropped by to clue us in on the post-apocalyptic films that shaped his deliciously twisted vision.

If you haven’t checked out his work already, you can get to know more about him at his website. (Don’t tell him I said so, but he’s a sweetheart in person and you can stalk him, uh, I mean meet him and say nice things to him, when he visits a town close to you.)

Here’s his answer to the question, “Mario, what do you write?”

Take it away, Mario!

Day after Doomsday by Mario Acevedo

We all worry about tomorrow. But what happens when there is no tomorrow? Meaning the world as we know it has gone poof! Or bang!

Here was my assignment, write about my favorite post-apocalyptic movie. Which is timely considering the country is in an apocalyptic mood.

I wonder about the fascination with such gloomy predictions. We scramble so hard to make the world a better place and yet we like to dwell on catastrophe.

Here are my movie picks.

We’ll start at the bottom.

DAMNATION ALLEY (1977) Not a particularly good movie. I give this post-atomic piece of cheese four slices. Starring Jan-Michael Vincent (what happened to him?) and George Peppard. Had a for real all-terrain vehicle with nifty tri-wheels that could climb over big rocks. See attacks by giant cockroaches! What was special about this film was that the studios predicted this turkey would be the sci-fi thriller of the summer. Instead it got roasted by a little flick called Star Wars.

THE OMEGA MAN (1971) Yet another interpretation of Richard Matheson’s novel. Film adaptations include one with Vincent Price (The Last Man on Earth-1964. Regarded as the most authentic to the book), the recent version with Will Smith (I Am Legend), and The Omega Man starring the Hollywood workhorse, Charlton Heston. I saw this movie in my formative years and the plot appealed to my youthful sense of anarchy (which compelled me to join the army. We make a better world by blowing it up.). In Omega Man, Heston thinks he is the last man on Earth which means he helps himself to all kinds of cool cars to tear around the city. A plague has turned the few survivors into zombies and at night they claw at barricades to get at Heston. Though in his later years he became a right-wing mouthpiece, in this movie Heston wasn’t afraid of a little jungle fever provided by the luscious Rosalind Cash

SOYLENT GREEN (1973, again with Charlton Heston) The premise of this movie could be the final Powerpoint slide of Al Gore’s Inconvenient Truth. Overpopulation and environmental destruction has driven civilization and the planet to the verge of collapse. No one has jobs. (Yikes! Maybe this movie was too prescient.) The government keeps hungry mobs in line by doling out multi-colored crackers made of who-knows-what. For riot duty, the cops didn’t bother with tear gas, they used front end loaders to scoop up the troublemakers. Despite the futuristic setting, the hi-tech toy (for its time) was a lame pre-Space Invaders video game. Apartments (if you could afford them) came pre-furnished with booty call (all babes, naturally. Sorry women, no man-candy available.). The movie was shot with a hazy glare to replicate the smog and the depressing ambience. Noteworthy as being the last movie appearance of tough guy, Edward G Robinson. Everybody gets on but it was sad to see him as a frail old man. Heston utters the most terrifying words I hope we never hear: “The oceans are dying.”

Spoiler Alert (unless you’ve seen The Simpsons)–The punch line of the movie has become a joke. Soylent Green is people! In her wisdom, Mother Nature doesn’t condone human cannibalism. Even with Soylent Green we wouldn’t last long as we’d die from a people version of mad-cow disease.

THE TIME MACHINE (1960) Though remade in 2002, I prefer the original with Rod Taylor. In this movie we go way, way past the apocalypse. I was in awe of the time machine in its ultracool Steampunk Victorian glory (loved the sound) and the time-lapse special effects of bodies decomposing and the earth changing. Didn’t like that all the good people were as blond as Nazis (though wimps) and the Morlocks looked suspiciously ghetto. The civil defense air raid sirens freaked me out (and still do). I first saw this movie on summer vacation when we kids got into the theater by bringing empty cartons of Meadow Gold milk products. 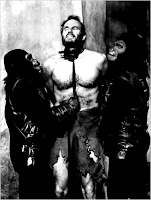 PLANET OF THE APES (1968) My favorite post-apocalyptic movie, and yet another Charlton Heston flick. Though the more recent version with Mark Wahlberg (2001) has better special effects and the ending is more in keeping with the original novel by Pierre Boulle, the Heston version remains on top because of its dramatic punch. Compare Apes with another classic sci-fi movie that came out that same year: 2001: A Space Odyssey. While Odyssey captivated audiences with its gorgeous special effects and music, the head-scratcher premise of its bizarre ending couldn’t compete with the final whammy of Apes. I didn’t know the ending when I first saw Apes and it had me thinking for days. Unfortunately, the sequels redefined suck.

See you in the End Times.

6 thoughts on “In the Handbasket: Mario Acevedo”