When my daughter Nora was small, she and I took a lot of short trips together. We started out when she was just a few months old, driving the five or so hours from Lewisburg, WV to Poquoson, VA, where my parents lived. Then there was a truly disastrous trip to Florida with a doctor’s wife and her son, who was a year old, just like Nora. I discovered about a half hour into it that childbirth had left me with backseat motion-sickness, then somewhere in South Carolina the woman was screaming at me that she was going to leave my daughter and me the gas station where we’d stopped, plus, she spent the entire trip driving in the passing lane, cursing at the people who passed her on the right, and when we returned from that hellish week, her husband left her. Later, the summer that Nora was five, we drove from Holland, Michigan to a neighbor’s upstate vacation lake house. Her family was very nice and I was kindly initiated into the particulars of, well, spending several days in someone else’s decades-of-tradition-bound lakehouse. My biggest mistake was to take along our German Shepherd, who timidly jumped into the lake after our host’s cheerfully raucous Labs. Swimming was not his favorite sport, but he was always game. It was a rather tense five days (okay, I was the one who was tense–but between worrying that Nora would wander off into the lake unnoticed and being enclosed nightly in a room with a sodden German Shepherd, I barely slept).

Here is where I finally get to the point:

There are cherries in upstate Michigan! The blooms on the orchard trees had long faded, and the cherries were still very tiny, but you could tell they were going to be wondrous. It wasn’t but a couple weeks after we went home that they appeared in the local stores by the bucketful. So lovely. I don’t think I’d ever really thought much about cherries before that. (Did you know Michigan grows much of the country’s celery as well?) My mother rarely bought them, and I usually only had them from cans of pie filling.

Bengal is wild for cherries. A week or two ago he declared that he and I should make a cherry pie. So we did–crust and filling and all. I wasn’t excited about the prospect of pitting a pound of cherries, though. Then we stumbled on this thing one day at Bed Bath & Beyond: 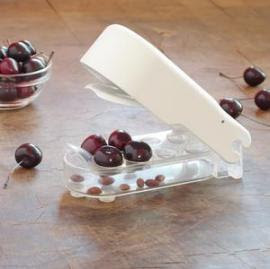 It’s called a Cherry-It Pitter. I had no idea such a thing existed. It’s opened a whole new world of cherry goodness. It makes a very satisfying ka-thunking noise, and Bengal can operate it without taking off fingertips. We had all the pie’s cherries pitted in about ten minutes. (When you’re done reading, click on the link. BB&B has a demo.)

Now if you’re a purist, or just plain cheap (as I usually am), you can use a number of other low-cost methods to pit cherries. I went to youtube and found one woman who used a small pipe from a coffee maker. She was quite smug about pitting her cherries so cheaply. But it didn’t look like much fun to me, and she was wearing protective gloves, which kind of freaked me out. Here’s a video from Whole Foods with happy people pitting cherries in cheery ways:

This is the pie that Bengal and I made. He picked out my favorite pie plate to use. It’s from Bybee Pottery in Kentucky, and was a gift from my MIL back before Nora was born.

The cherry filling was delicious. The crust was pretty and easy to handle, but a little on the tough side. Teaching a child how to make crust requires a lot of demonstration and experimentation. Pie dough will come out tough if it’s overworked during mixing.

And because I’m feeling ramble-ish today, I’ll throw this in:  Bengal and I bought one of those wacky, upside-down hanging tomato planters that you see on t.v., but it didn’t work out so well. After having our fingers pinched umpteen times trying to get several plants’ tender leaves through the little plastic vents, I gave up. So we plopped the surviving plant in a pot.

I was amazed to see buds, then a few teeny, tiny tomatoes. It bothered me for the longest time how small those tomatoes were. And they were all bunched together. I thought for weeks that I must have deformed and stunted them somehow. What could I have done?

Of course, today I realized that it’s a cherry tomato plant. Duh.